How We Built The A-Frame Shelby Shack Tiny House: 3 – The Window Wall

Time to build the first wall.

Catherine here! Even though the swing window wall was keeping water out, we were still missing two walls!  When it rained, water came in from the sides and pooled on the inside floor. We sweep it up, but we were still worried that the floor would warp. On top of us being new at this, we were all working full-time jobs/internships, so everything took so much time. Building this took about 12 weeks of working after hours, weekends, and when it wasn’t raining. We temporarily used plastic painter’s drop cloths to keep most of the rain out, which did help a lot. 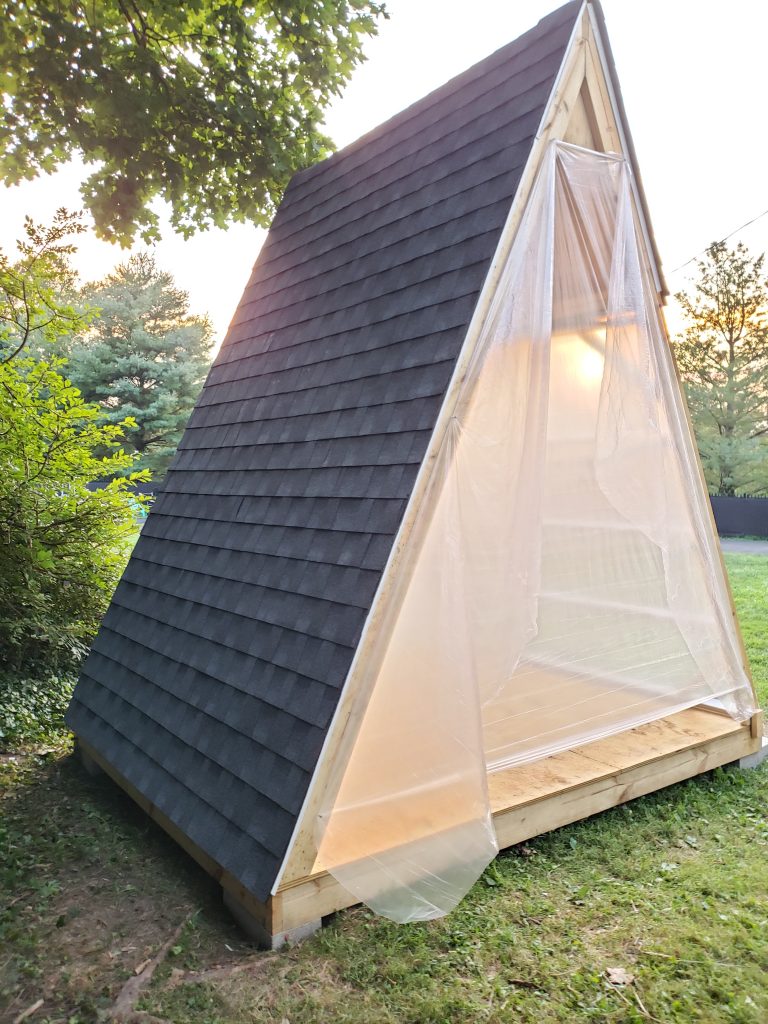 It was finally time to start building the side walls. One wall would have a window and the other would have a door. The designs we based this off of offered multiple complicated window options. To keep things simple, we bought a cheap window that slid open sideways. We also decided to use an old door that we had stored in our garage. Because both our window and door were different than the design, we had to get creative with installation.

Generally, wall studs are 24 inches apart. In our case, we needed four wall studs on each wall. To make it easier to build the walls, we made two of the wall studs the same width as the window on one side and two wall studs the width of the door on the other. This saved us extra framing work and time. Since it is a tiny house, there wasn’t much of a loss in support, so it worked out fine. 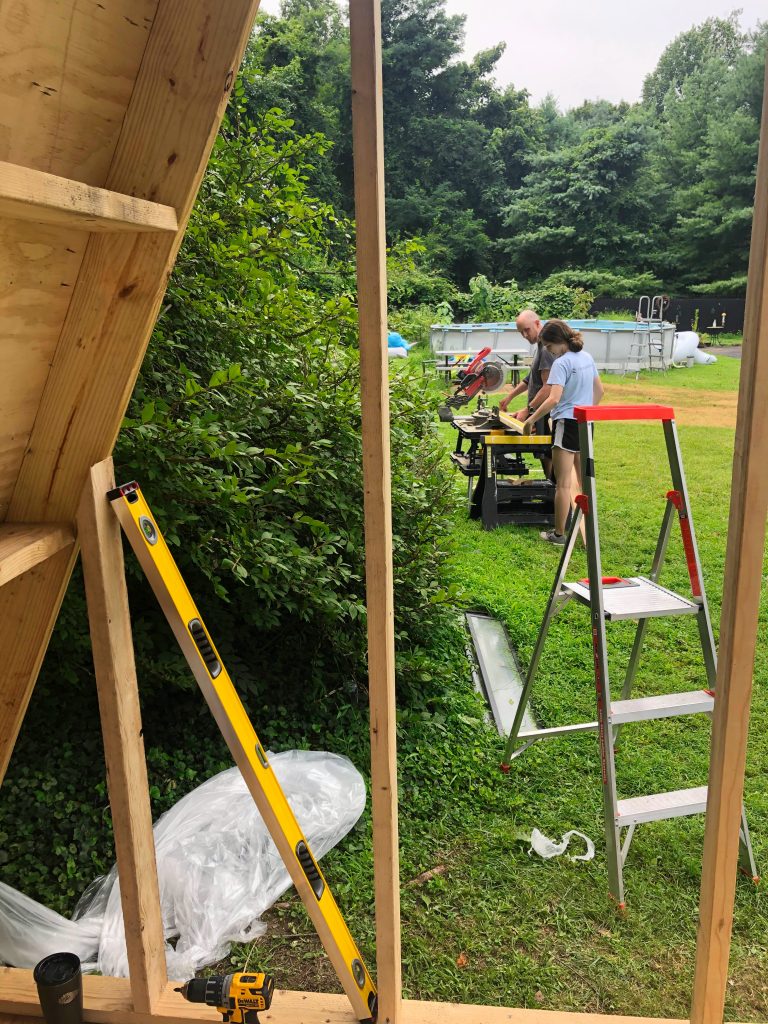 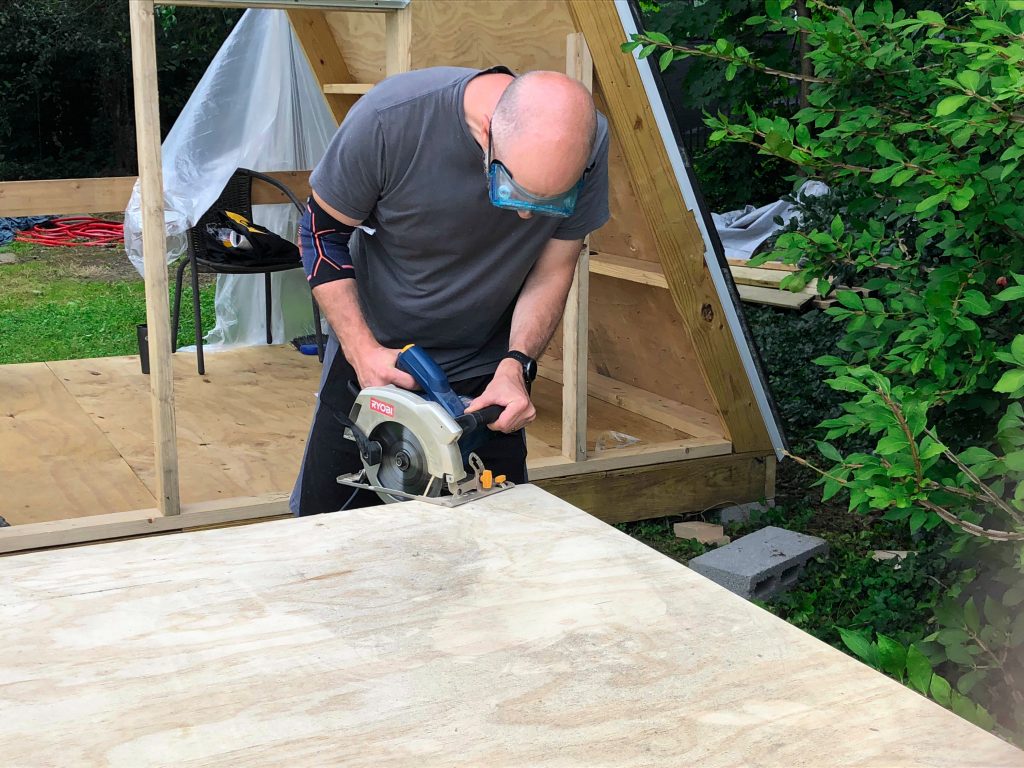 We were very nervous about getting the window just right. If the studs were too far apart, it would be too loose, and we would have gaps. We measured and measured, and tested, and in the end, it worked out with a snug (had to shove a little) fit. 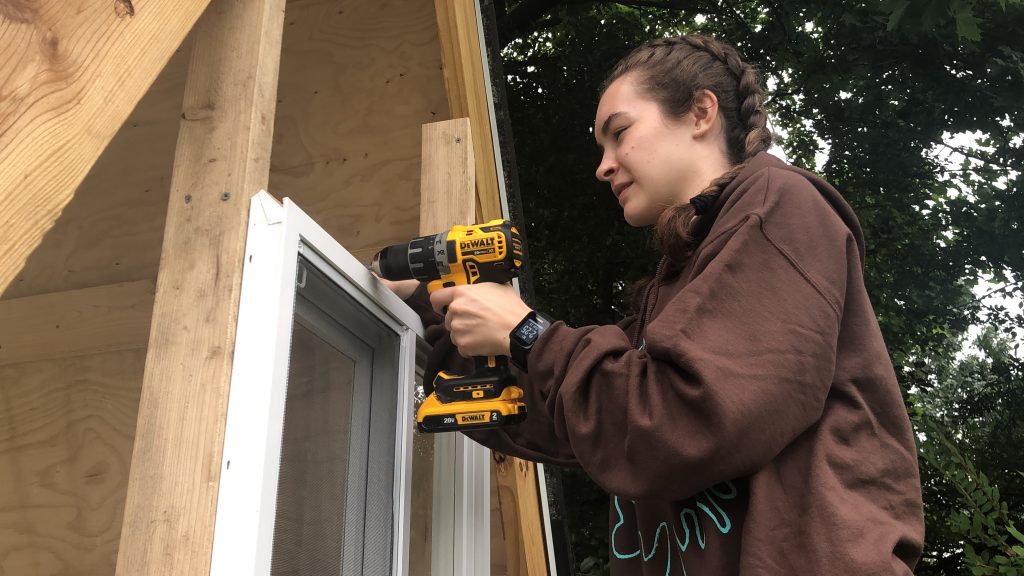 With the four studs and the window installed, it was time to cut the plywood for the wall. There were a couple of ways to do this, but we ended up with one that we thought worked well. 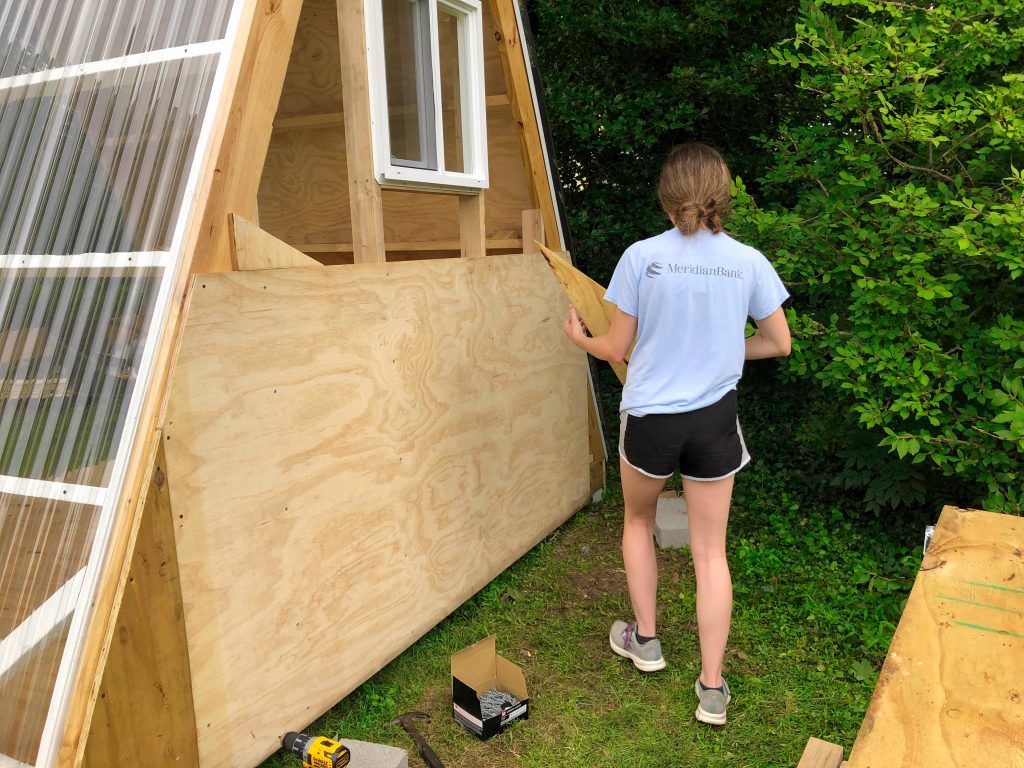 Getting the angles just right probably should have been easier, but it was still a little tricky for us. Theresa and I had to pull out our sick AP Calc skills to plan out all the pieces. 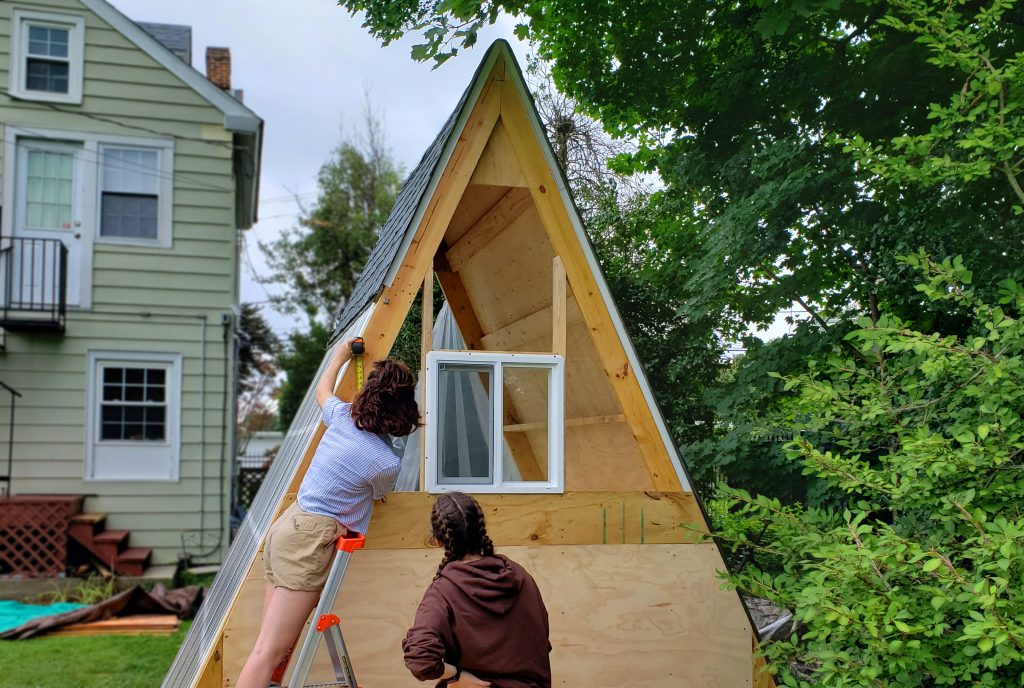 Piece by piece, it was all coming together. Because we got the plywood from different places and because a lot of it was assembled over time, the pieces looked pretty different from one another. We were a little nervous, but we knew it was going to be fine once we painted it all. 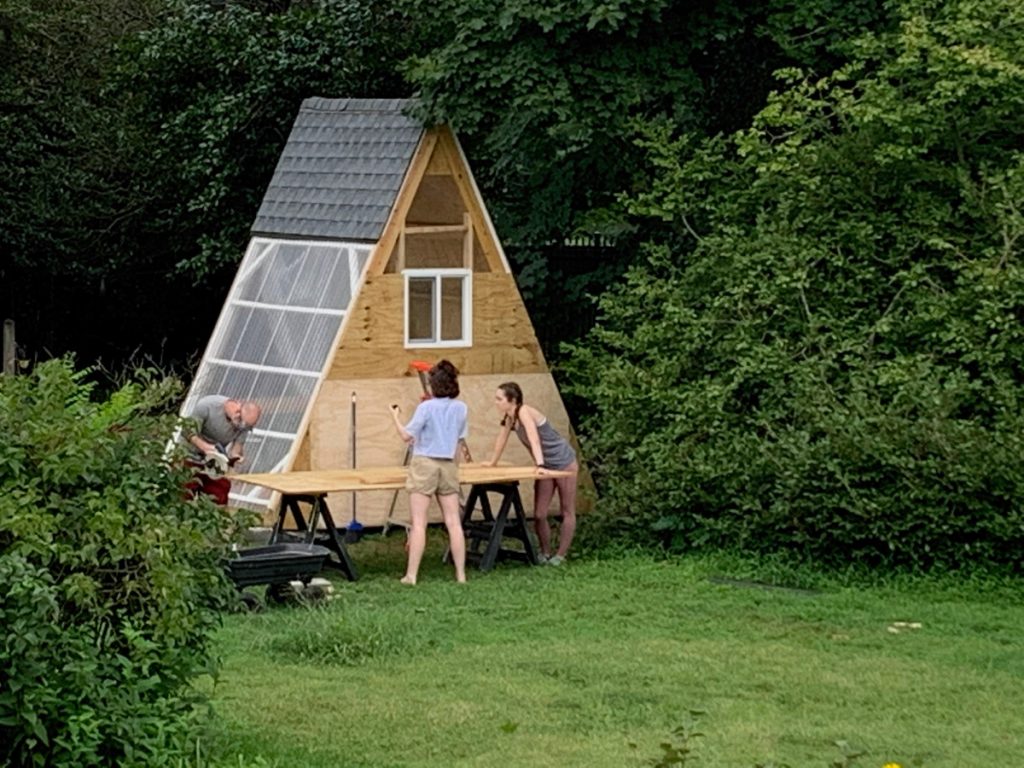 It was looking great, but there were still some small gaps we had to fill or cover later. In the photo below, you can also see the bolt for the swing wall. We had to make room for that in the plywood before we installed it. 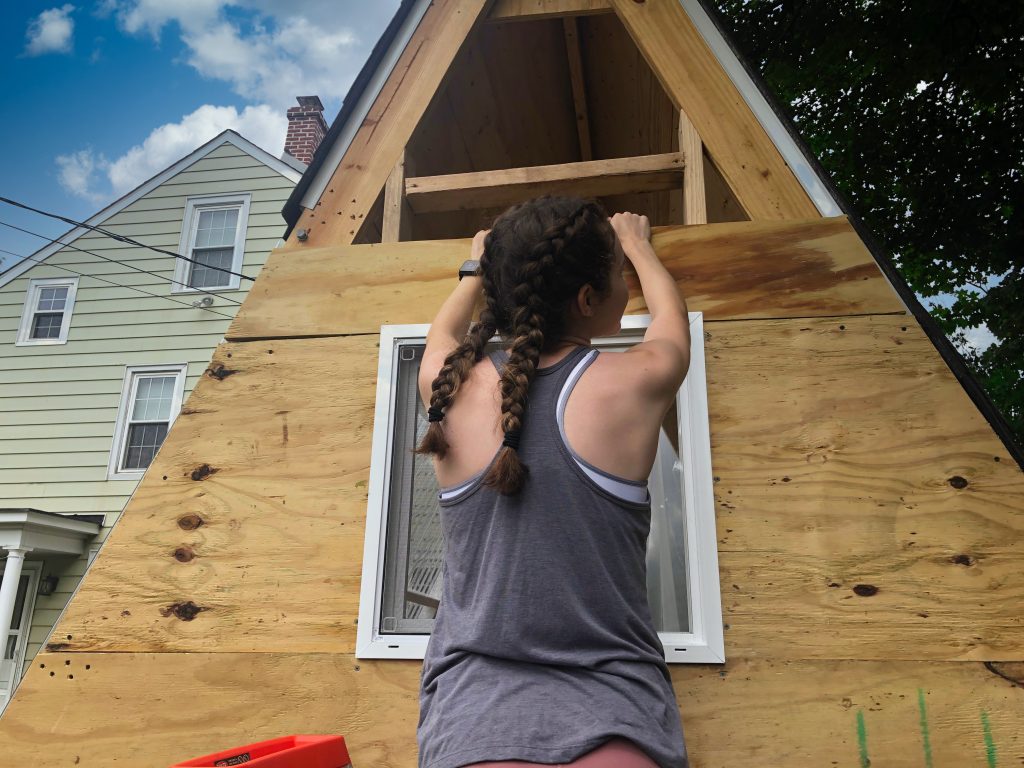 For the next plywood piece, we had to drill a hole in it to make space for the bolt. We were nervous about how precise we needed to be for the position of it, but it ended up working just fine. 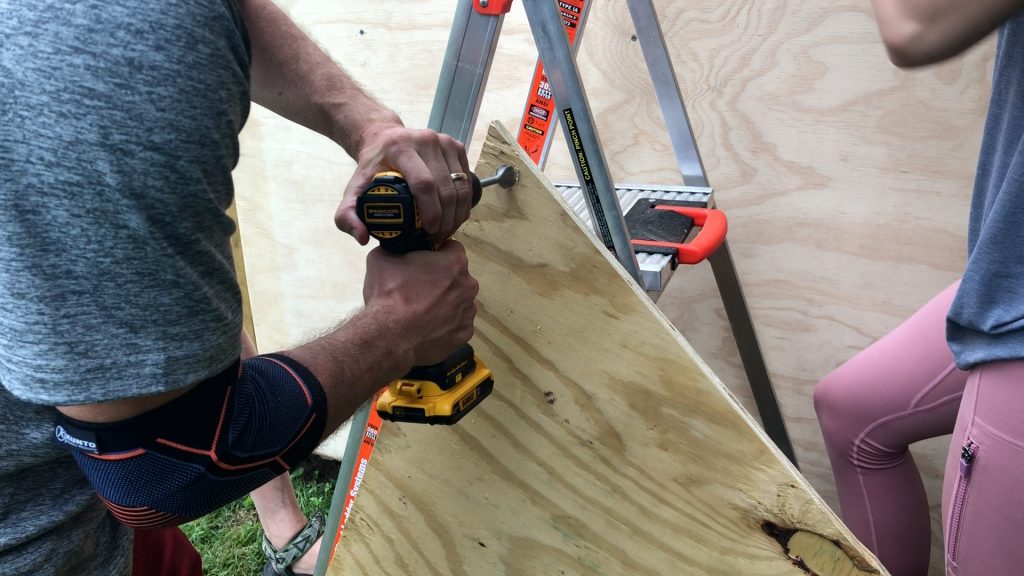 We got the plywood installed just passed the window. The final piece on top was tricky, but with Theresa and my measurements, it ended up fitting perfectly. 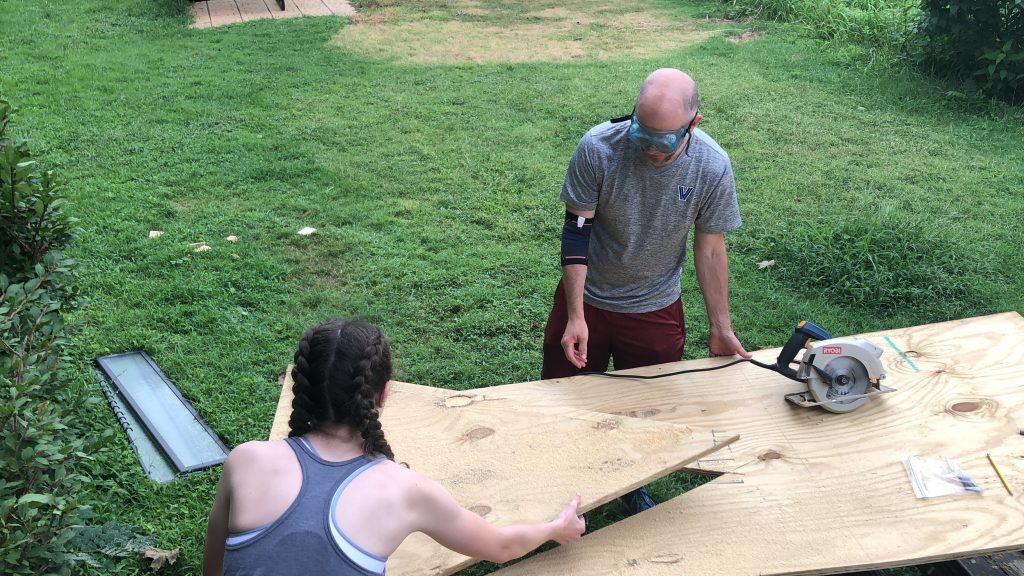 We used wood filler for gaps between the plywood. After it dried, we sanded and painted the wall with an extreme weather paint to help seal and protect it. A lot of this work was done after the sun went down with work lights. Wow, now that’s three walls finished. Are we done now? 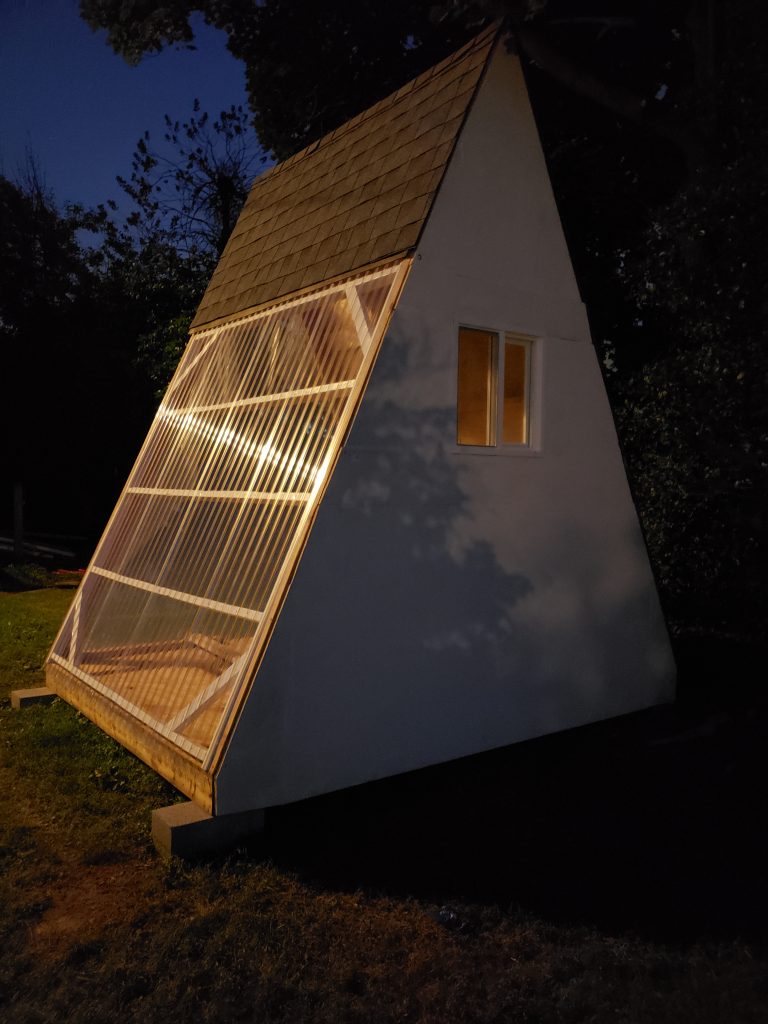 How We Built The A-Frame Shelby Shack Tiny House: 4 – The Door Wall