How We Built The A-Frame Shelby Shack Tiny House: 2 – The Swing Wall

We love, love, love the swing wall part of this design!

One of the reasons we fell in love with this tiny-house design was because it had a super cool clear swing window wall that was on a hinge that could be opened up. We were so excited about it that we decided to do the swing wall next. The installation of the swing wall was a little different in the design compared to how we ended up doing it. We did lots of measuring and made little mistakes along the way, but we eventually got it. 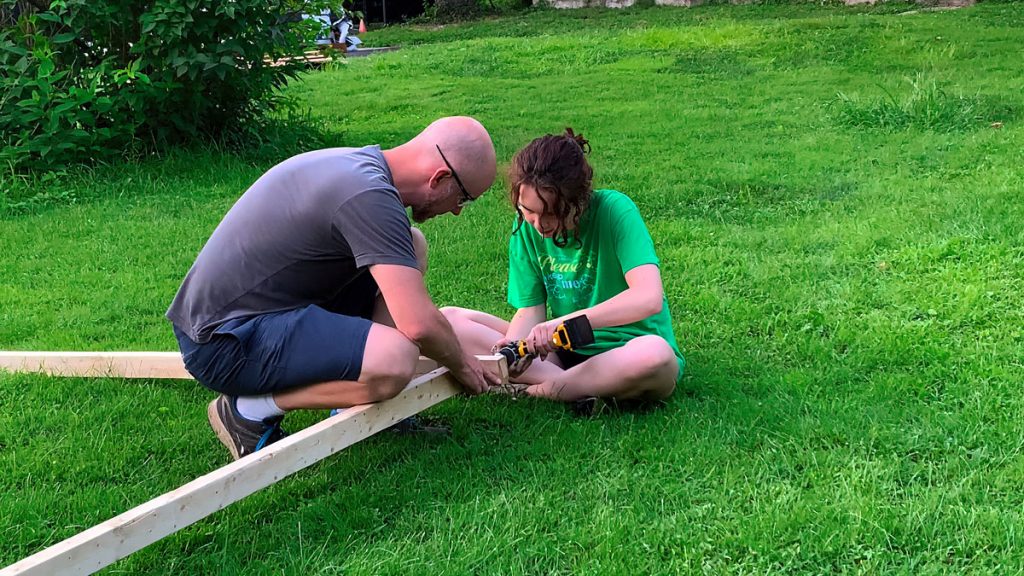 To ensure overall fit, we built the outside of the frame of the swing wall first. This all still being new to us, we took lots of baby steps. If the wall frame was too wide, it wouldn’t fit. If it was too narrow, it could potentially let in water and a draft. We placed the assembled window frame into place in the A-frame. It looked like a perfect fit (more on that later…). 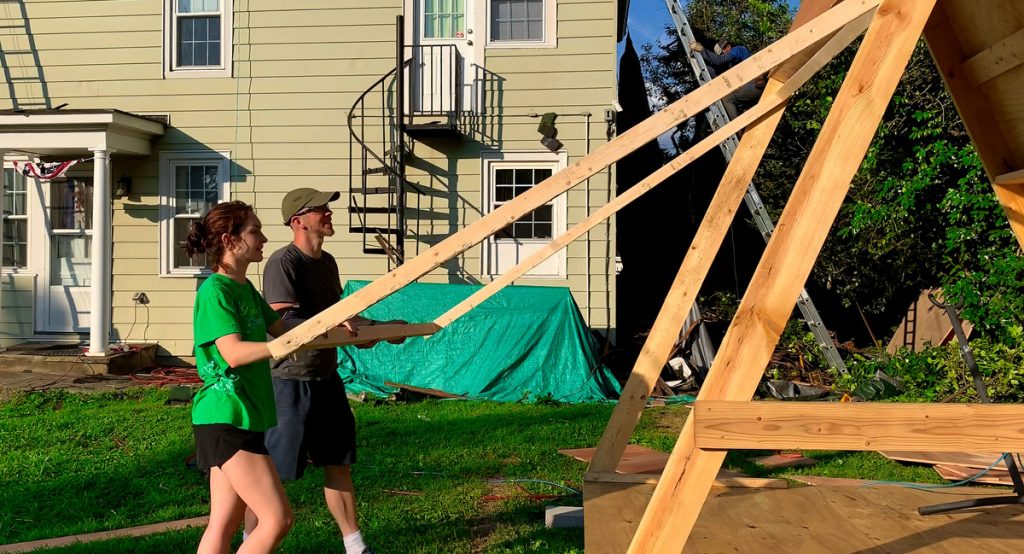 Once we were confident with the swing wall, we decided to paint the pieces before we started to assemble. All my sisters ended up helping with that. 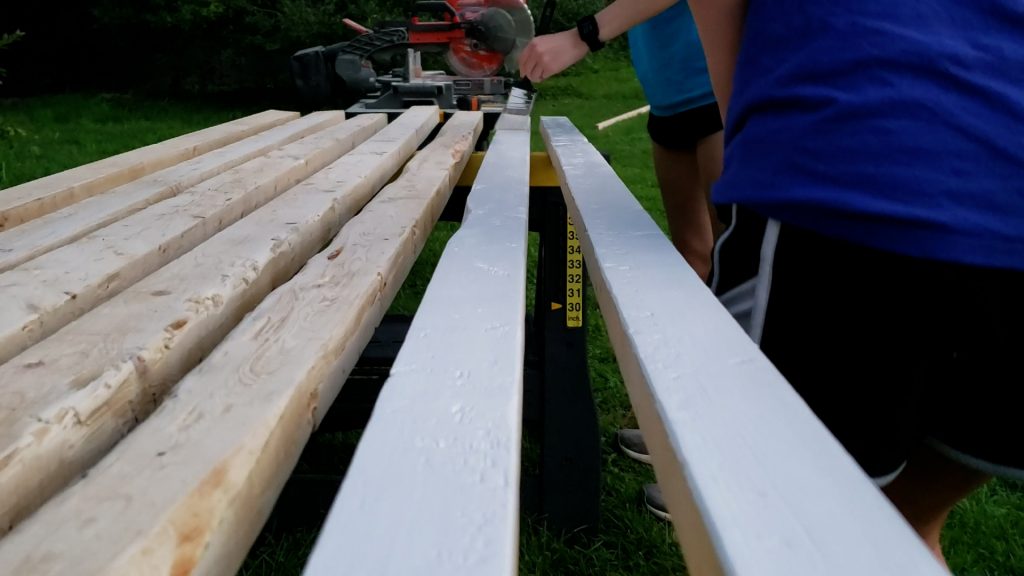 We finished assembling it and tested it again to make sure it still fit. We decided to install the corrugated plastic for the wall after we made sure it fit and looked like it would work. One part of the construction we almost messed up was that we almost forgot you have to have a little bit of the wood extend up at the top that will serve as part of the hinge. In the photo below, you can see we were lining up the wall to drill the hole for the hinge. (Clamps were great because they held many components in place while we worked.) 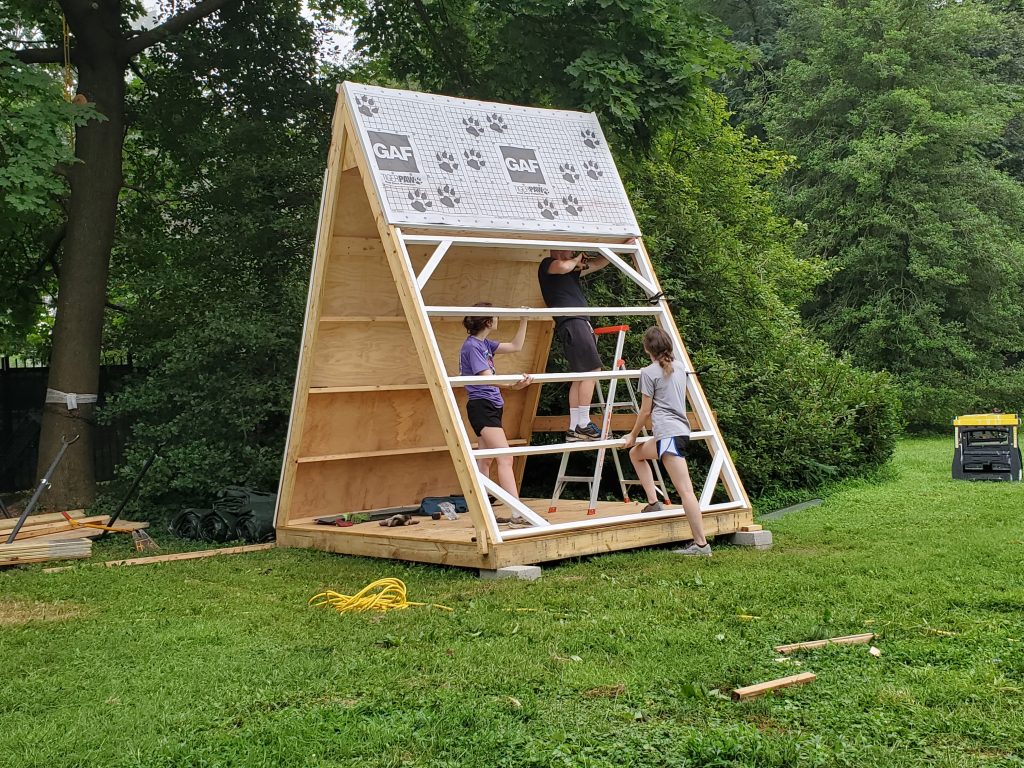 With lots of testing, troubleshooting, and adjusting, the swing wall worked. Next, we had to install the corrugated plastic sheets on the swing wall. We overlapped them to ensure we’d keep water out. (We ended up under-estimating how many screws to use to keep it in place. Later on, a storm with strong winds almost ripped right them off. Some emergency screws in the middle of the rainstorm helped us keep it secure.) 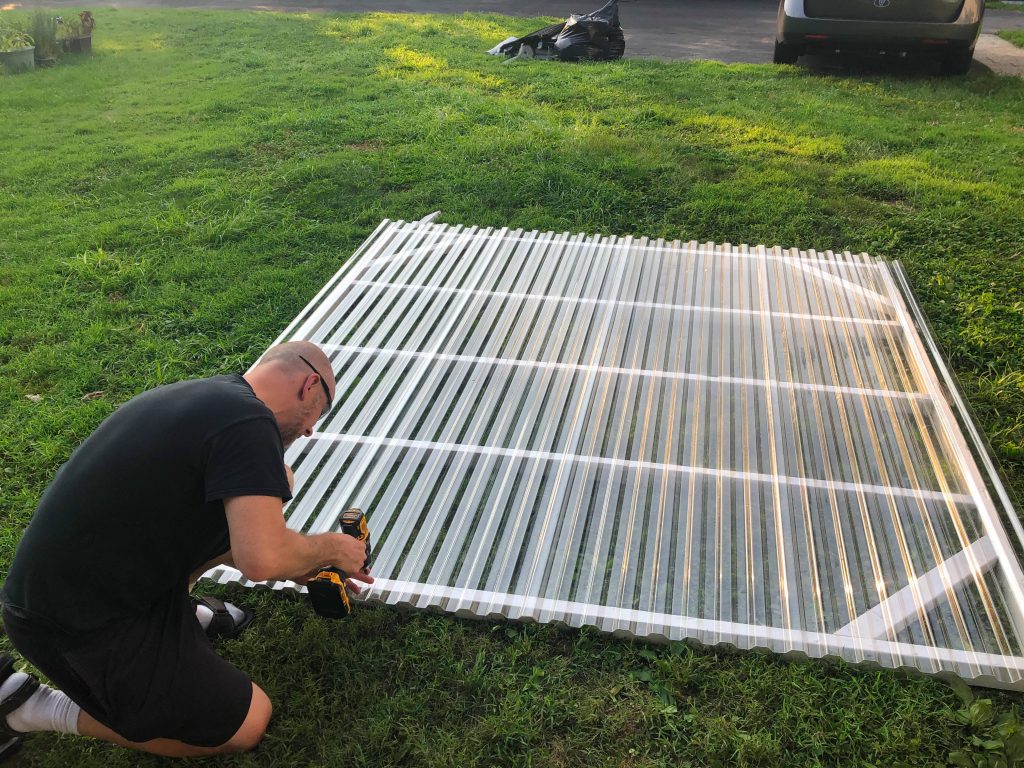 The plastic was longer than needed, so I carefully cut the plastic using a rotary (Dremel) tool, which was pretty fun. (We all learned to use many tools we hadn’t before.)

With the plastic in place, we decided to do one more test to make sure it fit. The plastic has to be installed tall enough to keep water out, but not so tall that it would get smashed when opening on the hinge. We also found out that the bottom angle of the feet wasn’t flush to the floor when closed. So we carefully cut those at an angle (mostly making educated guesses and eyeballing it.) 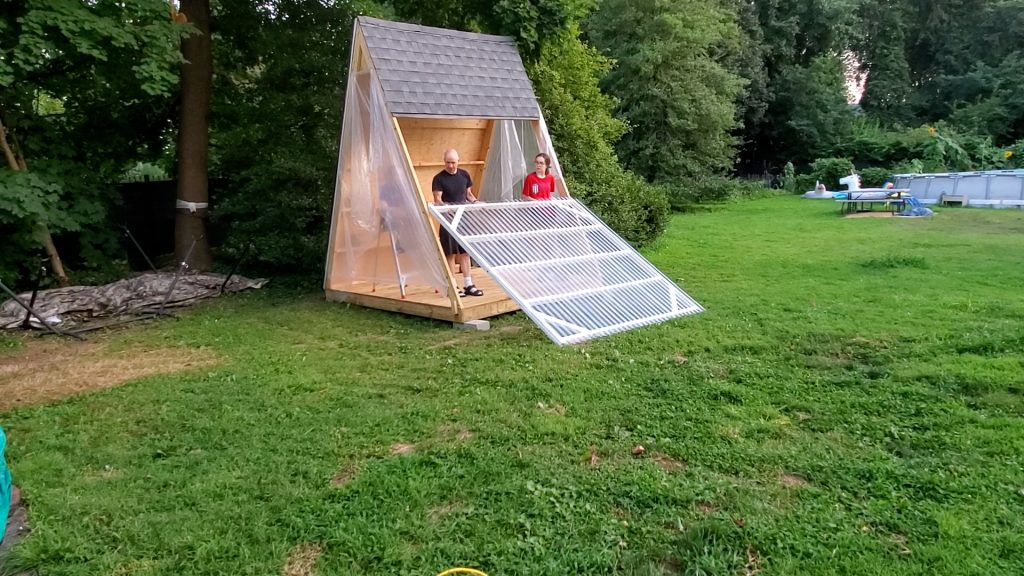 Once we felt good that it fit, we drilled the holes for the hinge, which were made of simple bolts. A big question for us was, will it keep the rain out? It didn’t take too much time before the next storm, and it did! 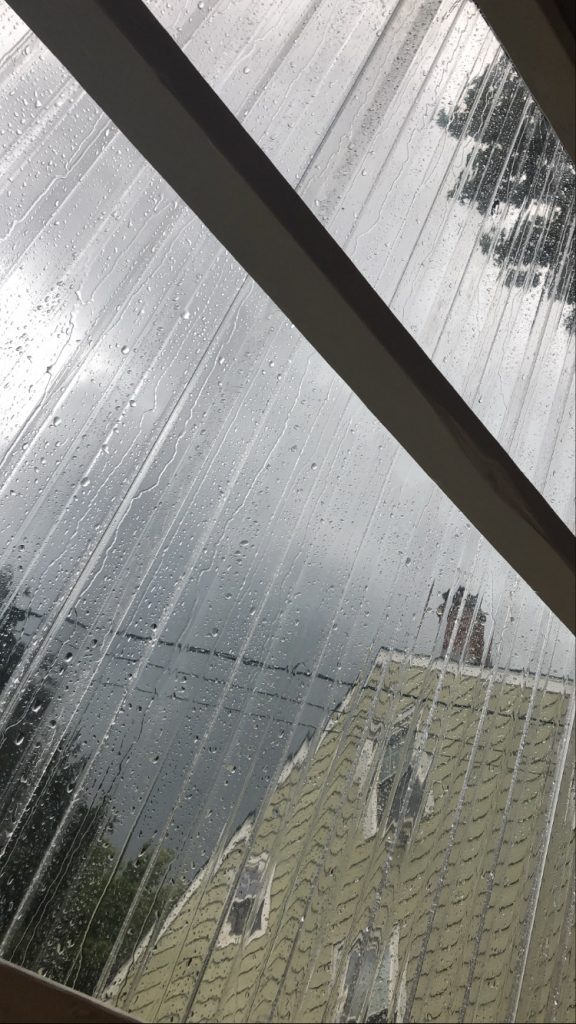 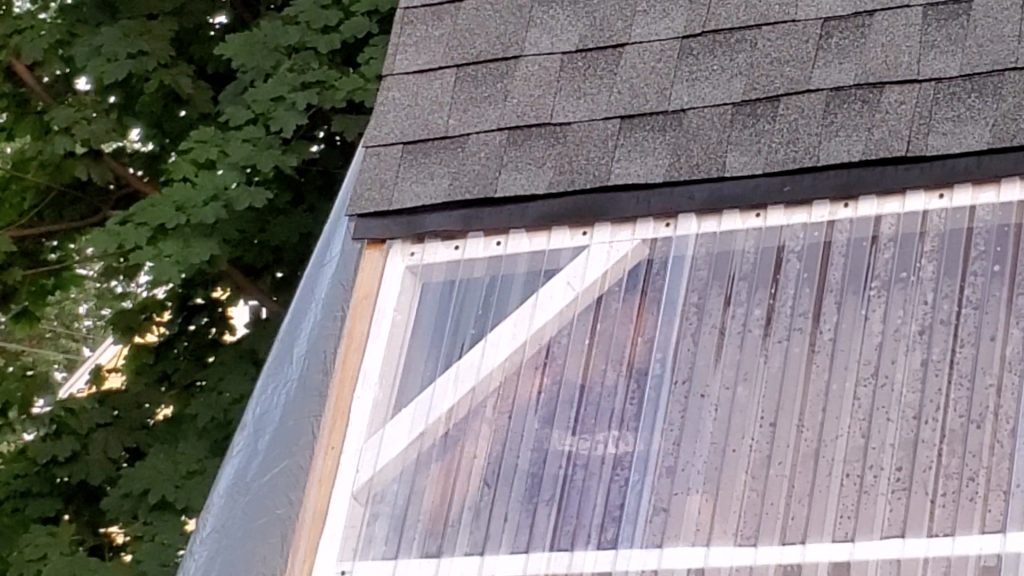 We had purchased something called shingle roll for the roof. It’s basically like a big shingle on a roll.  We were going to install it onto the plywood, but coincidentally we were getting a new roof installed on our garage around this time. We asked the roofers to install the same shingles on our little house. We thought this was going to save us time and give us a nice roof that matched our garage. It looks great, but it ended up being a nightmare. The designs we used called for short nails to install the roof. This is because the inside wall is the plywood, and you don’t want nails sticking through it. The roofers used standard length nails, so we had tons of nails poking through the inside. It looked pretty awful and dangerous on the inside. We got an oscillating multi-tool to cut the nails (over a hundred but it felt like a million) flush to the plywood. The blade on the tool used to cut the nails kept wearing out (those roof nails were tough!), and we had to upgrade to new stronger blades. Even then, we spent HOURS cutting most (except for the very top of the ceiling) of the nails flush against the wall. We consider this one of our biggest mistakes. It was very, very annoying.

With the roof finished and the swing wall installed, we were happy with that major step in our progress! Look at me giving a thumbs up lol. 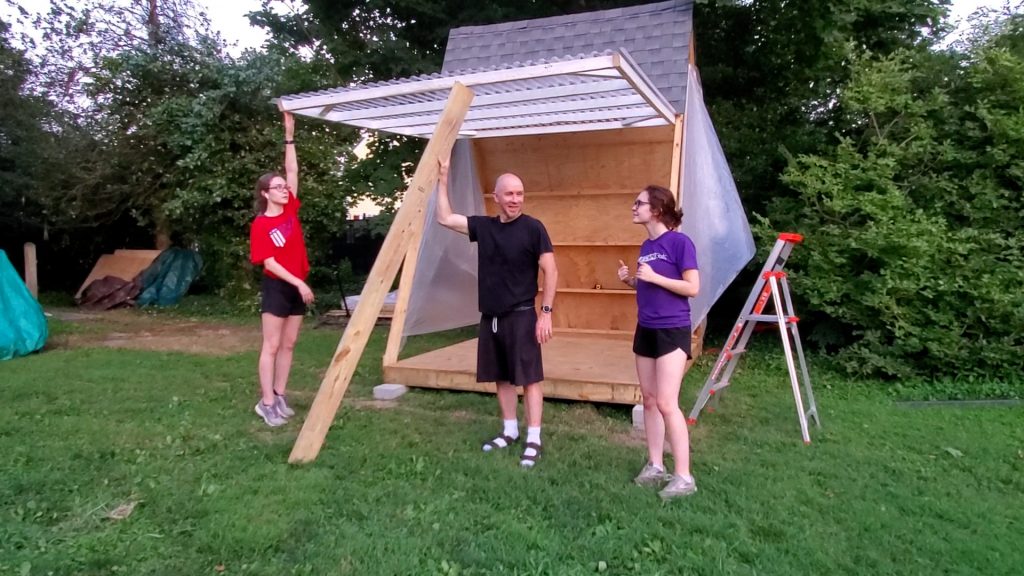 At this stage, for the swing wall to stay open, it needs to be supported with a beam of wood. We didn’t install anything official yet; we just used one or two boards to prop it open (more on that later).

Catherine is up next to talk about steps three and four. You don’t wanna miss it!

PREVIOUS STEP 1 – The Base and Frame

NEXT STEP: 3 – The Window Wall

How We Built The A-Frame Shelby Shack Tiny House: 3 – The Window Wall