How We Built The A-Frame Shelby Shack Tiny House: 6 – The Siding

Theresa had big plans for siding when their dad thought they were done already...

Guess what. Theresa’s back! I can’t wait to tell y’all about step six.

My dad is boring and thought we were planning to just paint the exterior walls white. Not to worry, I had a good plan.

I had seen people who had taken reclaimed wood pallets, stained the wood, and used them as decorative wall coverings, and in some instances, as siding. I spent a long time convincing my dad to go for the brilliant idea. I showed him photos over several exhausting weeks (he’s a hard man to persuade) and he finally agreed. We agreed that by staining them three different colors, we could create a really cool design.

I searched on Craigslist for a couple of weeks for free pallets. When I found some, we took the seats out of the mini van and picked up about six. We found that we could only really use the main slats to add any real uniformity to it. Once we cut the slats off the six pallets, we measured them and did some calculations.  We found out we needed wayyyyyy more pallets to cover both walls. We found another person on Craigslist who had over 25 he was trying to get rid of. Not only did he give them to us for free, he actually delivered them for FREE too! Wowie, that was nice! 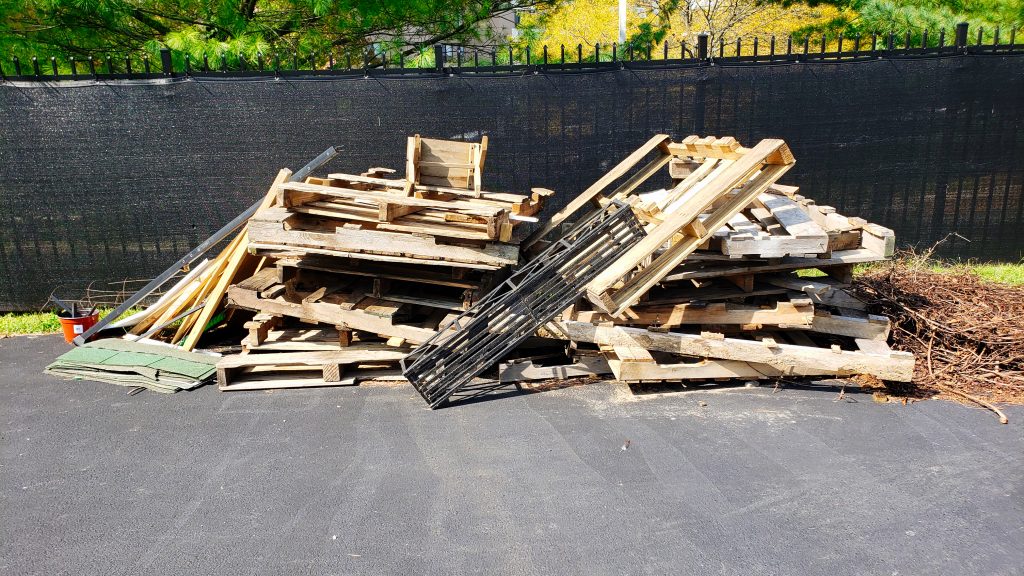 What we didn’t know is that we greatly underestimated the time it would take to complete this.  Because we got pallets from different sources, the dimensions of the slats varied. We had to cut to match the sizes, sand them, and then stain them. It ended up being a TON of work. These steps alone took weeks with a ton of time after dinners to the dark of night and many hours on the weekends. 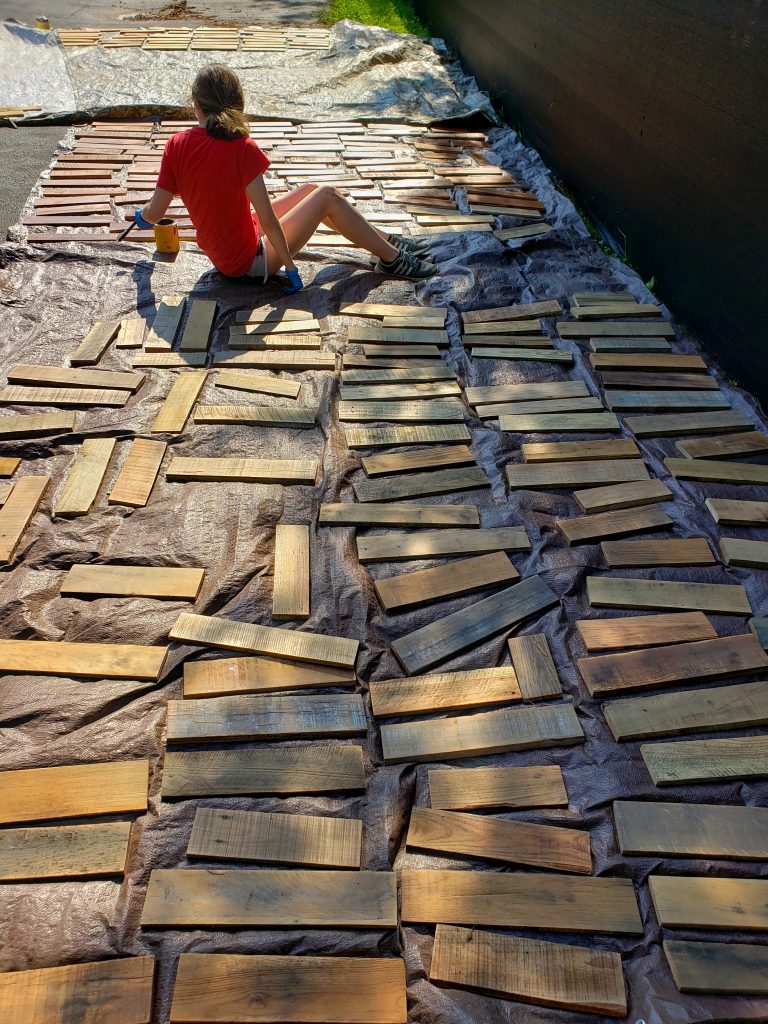 Catherine is up there hard at work on the siding and below I took a quick model break in between staining the deck to match the middle color of the siding.

Around the window wall, we installed waterproof self-adhesive flashing to help keep water out. At the time, we didn’t really know what we were doing but wrapped both walls with house wrap to help insulate it and to keep moisture out before putting the siding on. 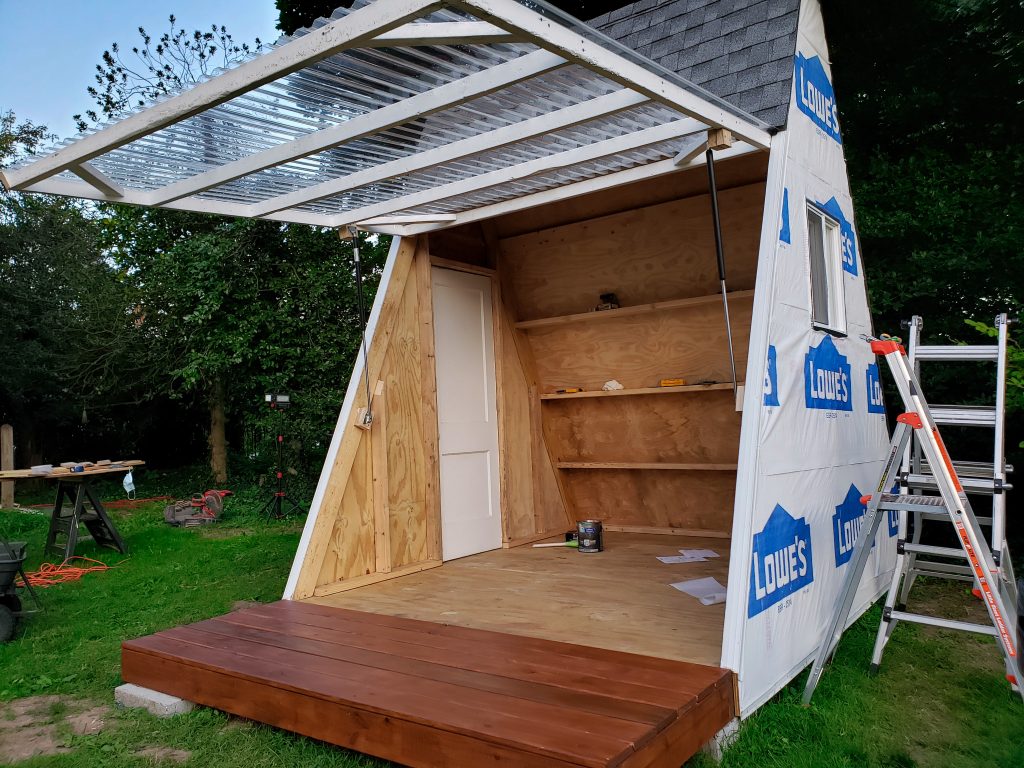 We were planning on nailing the siding on by hand, but we did a few tests and realized it would take forever and was basically impossible. Nails barely reached half an inch through some of them after hammering. When my dad told his brother Justin about his frustration with the siding, Justin came to the rescue! He gave us a nail gun we could borrow. Not only that, there were special kinds of nails that would go into the wood siding completely, so you wouldn’t have lots of visible nail heads. They are called brad nails. We never did this before, so this was all new to us, but probably pretty obvious to other builders.

We all learned how to use the nail gun, which was VERY fun to use. 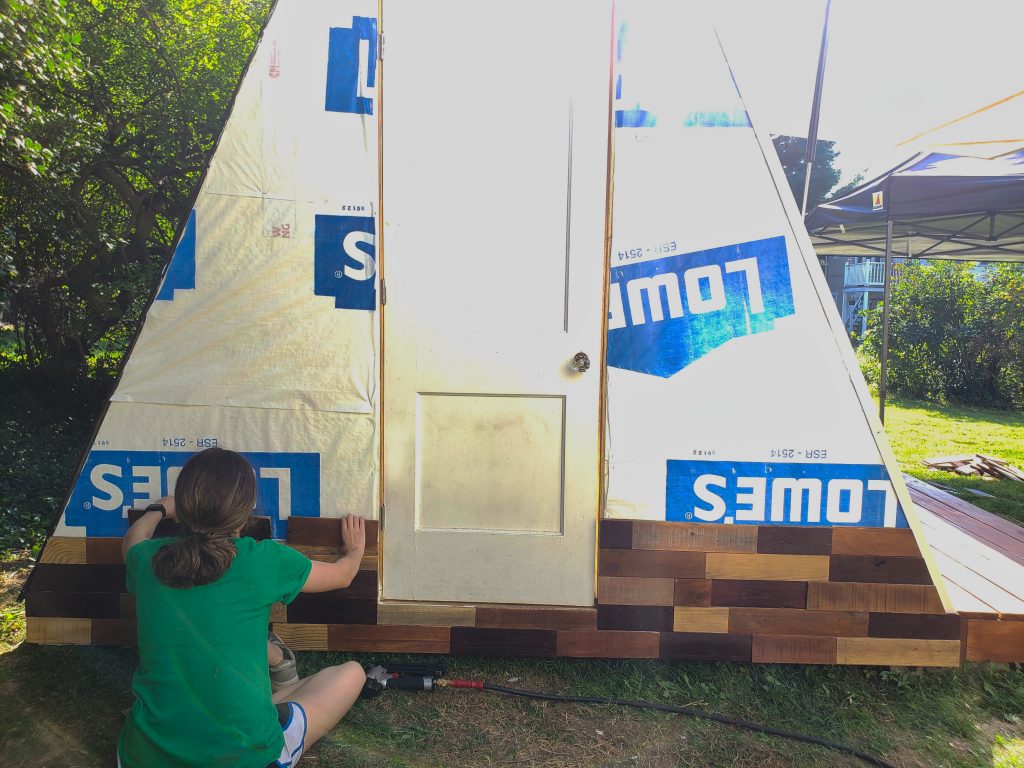 Despite the time savings of the nail gun, it still took us a long time. We tried to make the wood as uniform as possible, but there were still variations that needed to be cut and tweaked. We wanted them all as flush to each other as possible, keeping gaps to a minimum. At this point, we were into the fall, and it was beginning to get dark earlier, so we also borrowed a work light from my Uncle Justin so we could work on it into the night more easily. We set up a camera to do a time-lapse of me finishing one of the sides – it took all day, but it was totally worth it! I don’t know about you, but I find this time-lapse very satisfying.

Catherine and I celebrated finishing the other side by singing to the music that we were jamming to while we worked. (You’ll have to watch the video if you want to hear vocals lol.) 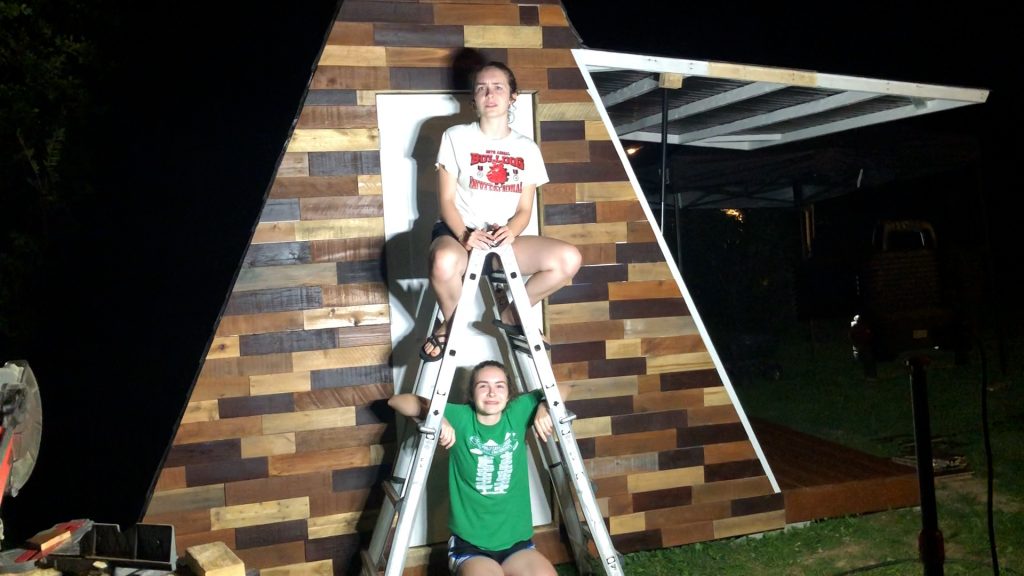 I know I don’t look very happy, but I promise I was just tired. Despite it taking much longer than we anticipated, it was definitely worth it. IT LOOKS AMAZING! Look who’s laughing now dad! haha anyways… 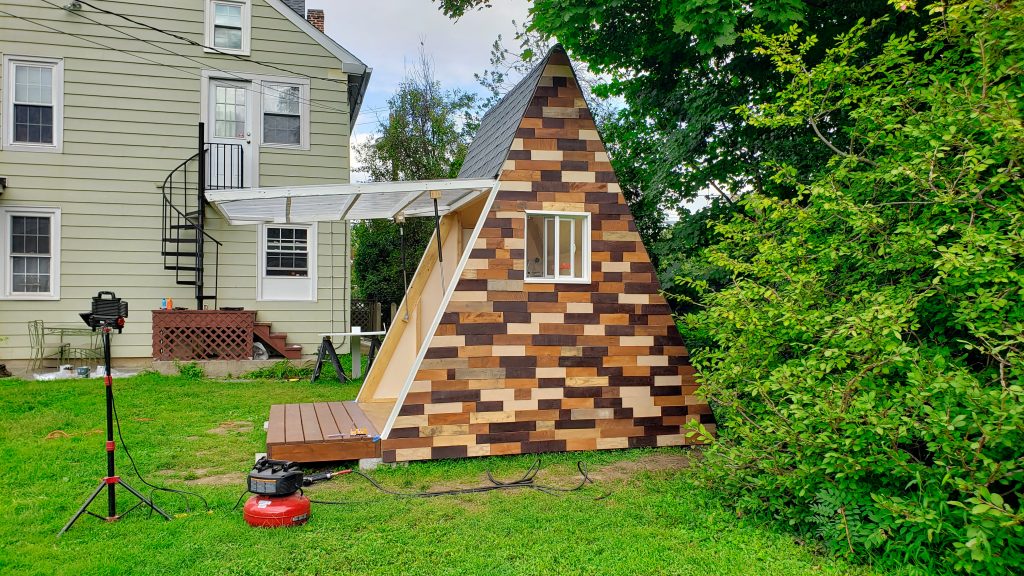 We filled a few of the larger gaps with wood filler, sanded, stained those spots as well. We also did a lot of touch up staining and painting of the exterior because it obviously had to be perfect. We finished by using a seal coat on the siding to help protect it from ~the elements~.

Alright, that’s enough from me for now. Catherine’s gonna show you what we did with the interior next!

NEXT STEP: 7 – The Interior

How We Built The A-Frame Shelby Shack Tiny House: 7 – The Interior