How We Built The A-Frame Shelby Shack Tiny House: 9 – The Floor

We were floored by the difference...

Catherine again! Everything was looking great in the Shelby Shack, except the floor. We knew we wanted to do the floor as one of the last things inside. We considered a couple of options – a rug, paint, or flooring.

Theresa found some stick-on vinyl flooring and estimated how much we would need. It was a nice wood style and we thought it would go well with the siding and deck. We ordered it online, and it arrived a few days later. We had used wood filler in some of the spaces between the small gaps in the floorboards, and we also had some left over window flashing tape (we had used for sealing around the window) that we used on the floor as well. We also sanded the floor to make sure the vinyl adhesive would stick well–it was pretty dirty before and had paint that had dripped on it. We used a laser guide to find the center of the floor for our starting point. 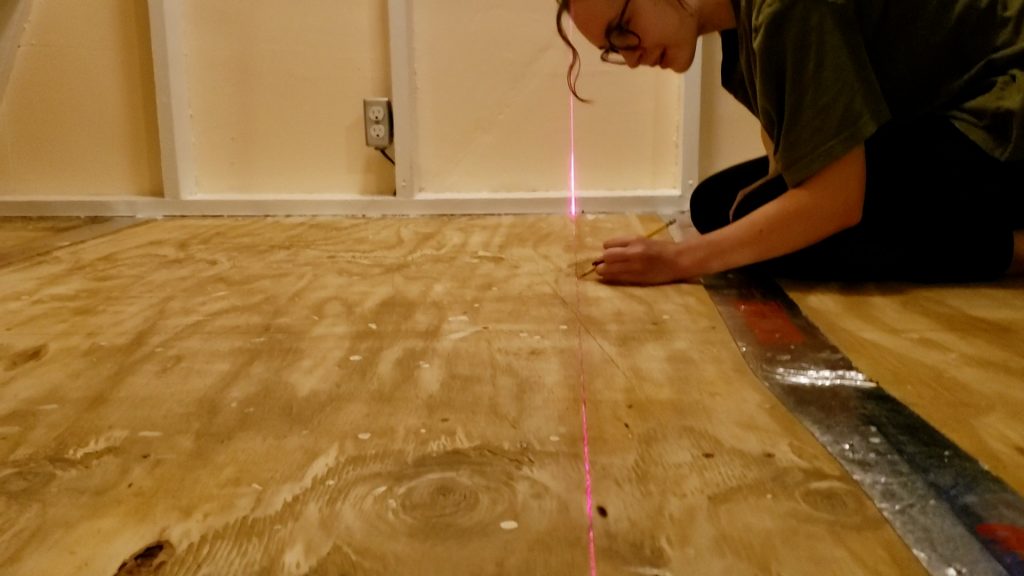 Our vinyl flooring was peel and stick. The process was pretty fun to see the final steps come together. 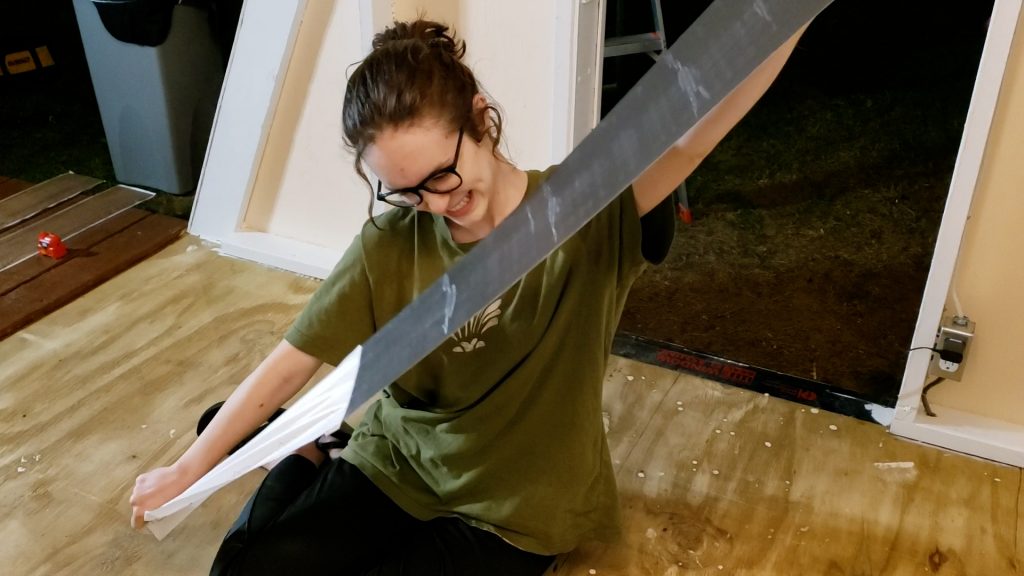 Theresa and I put down most of the floor while our dad cut the pieces to fit. As you can see in the picture below, Theresa always has amazing nails. (here too) 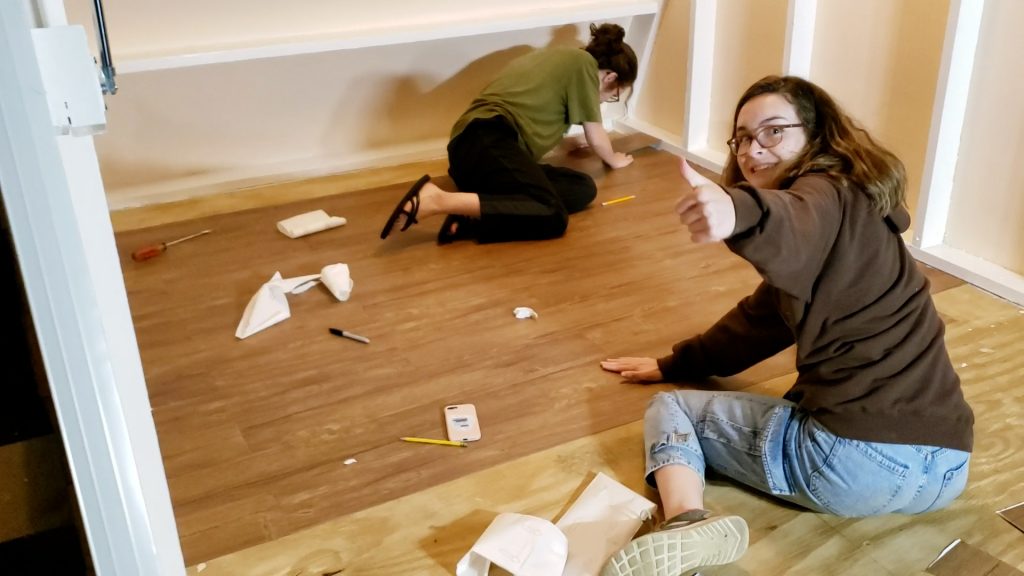 Cutting the boards with a utility knife was a bit more tedious than anticipated. It was hard to get everything to fit just right. In a few instances, there was a small gap between some of the floor and wall boards. When that happened, we were able to cut the floor pieces a tiny bit longer and used the extra to fit between the pieces, which made it look pretty good.

We got so close to finishing, but we were just six boards short–our estimate was slightly off. We ordered another box and got it several days later. There were also a few boards that weren’t sticking very well from earlier, so we replaced them with new ones.

Theresa and I were so excited the night that we finished the floor, that we decided to have a sleepover right then and there. It was not a perfect night’s sleep (mostly because we were talking too much about more plans), but it was still one of the best nights.

Finally, Theresa installed some baseboard molding to hide imperfections and rough edges in our cutting of the vinyl flooring and to give it more of a finished look. 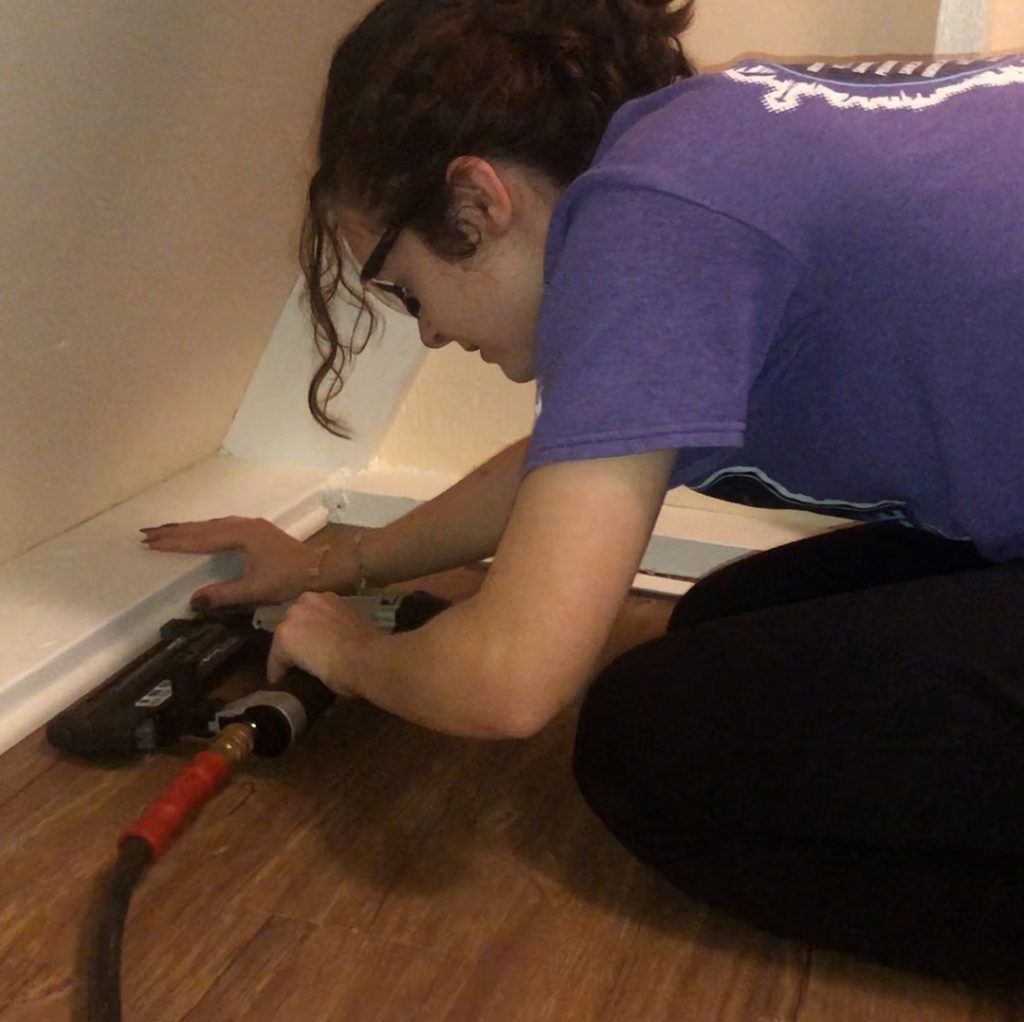 With the interior and exterior finished, it was time for final touch-ups. There were several small touches that helped make the exterior look finished. We put plastic white framing around the window and door. The front exterior pieces’ edge of the plywood was covered with white metal flashing as well. 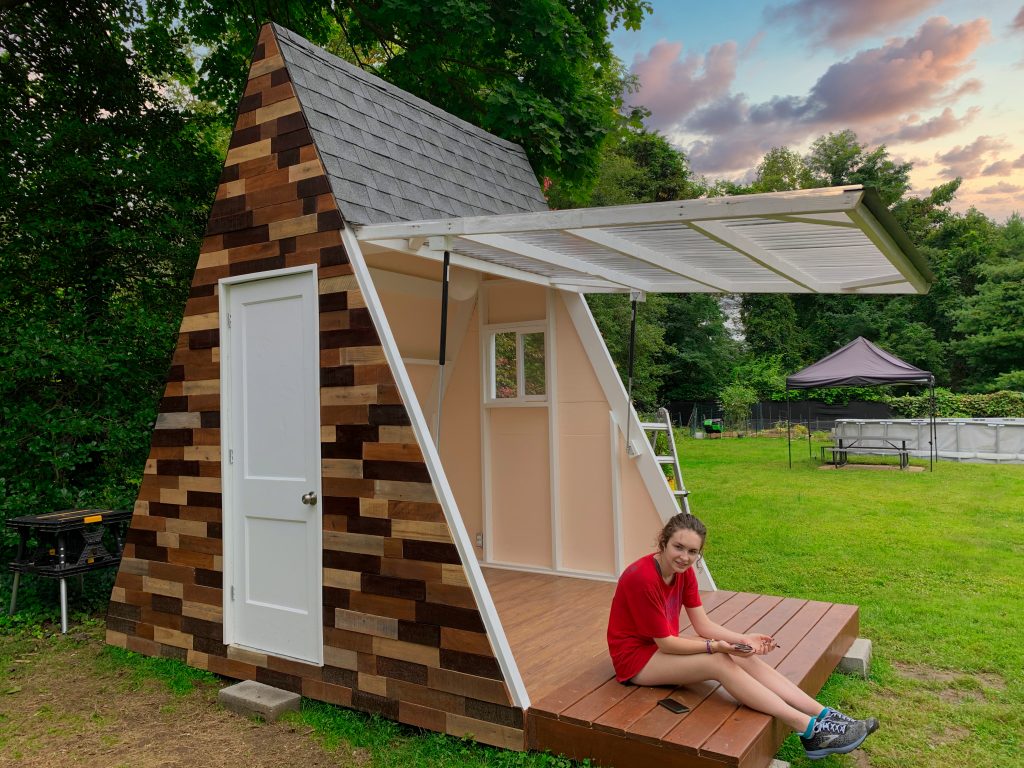 Ok so we have all four walls, we painted, and we did the floor. Surely we are now finished.

No, we aren’t, of course we aren’t. I swear we’re just never going to finish. Don’t get me wrong, I love it, but when are we gonna be done?

Well at least now I get to hand this off to Theresa to share one of her favorite parts: the furniture and interior décor.

NEXT STEP: 10 – The Interior Design

How We Built The A-Frame Shelby Shack Tiny House: 10 – The Interior Design